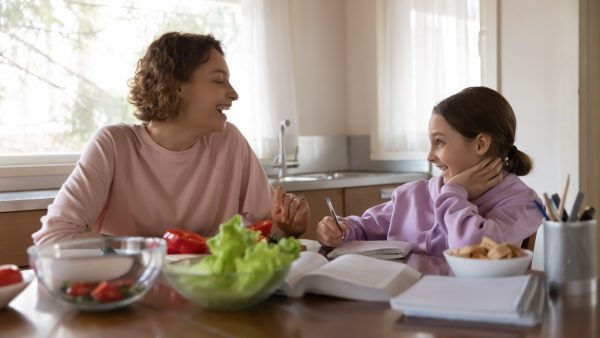 David Phillips September 9, 2021 at 12:00 AM
If you don't have a family meal each day, it's time to get out the plates. Table time yields benefits that go far beyond food.

The National Center on Addiction and Substance Abuse (CASA) at Columbia University says that the more often children eat dinner with their parents, the less likely they are to smoke, drink, or use illicit drugs. The center compared teens who dined with families five or seven times a week with those who did so twice or less. Those who ate together more often were four times less likely to smoke, 2.5 times less likely to use marijuana, and half as likely to drink alcohol.

The CASA says that teens who regularly eat dinner with their families are also more likely to get better grades and do better in school. Better grades are associated with a lower risk for substance abuse.

Teens who eat with their families fewer than three times a week report that the TV is usually on during dinner or that the family does not talk much. Conversely, the CASA says that families where teens are frequently present at dinner find lots to talk about. Common topics include school and sports; friends and social events; current events; and even family issues and problems.

CASA reports that family dinners have a similar link to mental health. Adolescents and young adults who seek treatment for depression, anxiety, and other emotional problems are about half as likely as their peers to have regular family meals.

Why? For one thing, mealtimes give children a chance to talk with parents about things that bother them.

Children who dine with parents tend to eat better, too. The Academy of Nutrition and Dietetics says that children who join family dinners eat more fruit, vegetables, minerals, and vitamins. They also eat fewer saturated fats and snacks, and drink less soda.