Within the Drug Enforcement Agency’s (DEA) Schedule of Drugs, are five classifications. These classifications are based on the Controlled Substances Act, which has eight factors that are considered to determine which schedule a drug belongs to. The three main factors are the drug's relative potential for abuse, medical properties, and risk to the public. (Factors, DEA 2019) The DEA requires pharmacies to obtain a license to dispense controlled drugs.

Did you know that states have their own Drug Scheduling? How do state schedules differ from the DEA’s national schedule?

POSITIVE SIDE - States can stop a drug trend or epidemic before it gets too far. Several states have passed acts to make Spice (a synthetic marijuana, mix of herbs) a Schedule 1 drug. Before, it was illegal nationally.

NEGATIVE SIDE - When States legalize a drug with a high potential for abuse, this puts patients and the public at risk. It also opens the door for federal prosecution if over prescribed. An example of the difference between state and federal prosecution is the state legalization of marijuana, which is still illegal federally. Each state enacts their own laws, making it difficult to monitor and enforce.

We encourage you to stay up to date on your state's and federal drug schedules. Here are a few resources to help you do that: 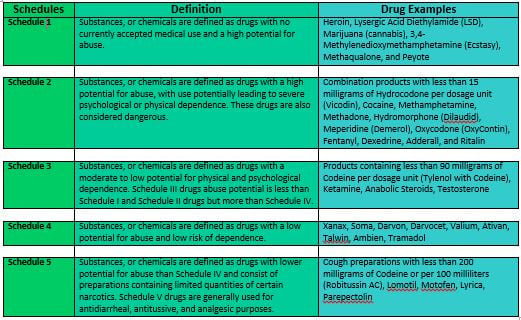 Next Article What do I Portray?